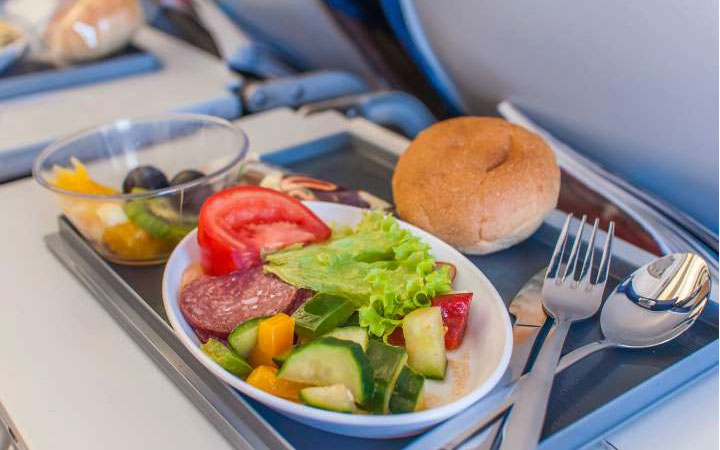 It is quite hard to figure out how to survive a long flight on an empty stomach, but it is even harder to pick the majority of the foods they serve on airplanes.

In-flight meals can sometimes be a little sketchy, and by the time you are done reading this article, chances are you won’t order airplane food ever again. Here, you will find a number of surprising things about plane food that flight attendants won’t ever tell you about!

1. The food is often overcooked

Airline food catering companies usually supply airlines with a variety of frozen food, but there are exceptions. However, almost everything needs to be heated again. The galleys on airplanes don’t have microwaves, and instead, they use convection ovens – which can result in the food getting overcooked, since the temperatures vary from one aircraft to the other, and if the plane happens to hit turbulence, for example, it can be a problem.

2. Food is prepared on the ground

When it comes to meal preparation, flight attendants heat up your food. Airline meals are prepared on the ground, both for safety reasons and because there isn’t enough space in the plane to have a full-on kitchen space.

Even if you are promised the best airline food, you won’t get a gourmet chef on the plane preparing it for you. The caterers start preparing the food about 10 hours before the flight, and then they preserve it by getting it blast-chilled – in-between refrigerated and frozen.

The vast majority of domestic airlines in the USA save the good food for the people who fly in first class and business class, so if you are flying coach, AKA economy class, you will probably never find out about the food upgrades they are making.

However, you can find some exceptions, like the Aegean Airlines that serve Greek-inspired dishes to all of their passengers regardless of their class choice.

4. You can splurge and get an upgrade

The same way you can pay a little more money and get a seat upgrade, you can order a business-class meal for the economic cabin if you pay a fee.

You will need to check with the flight attendant to be sure the airline you are traveling with provides you with that choice. Regardless, it is always worth checking their menu.

5. Many airlines test food during the flight

Cabin pressure will affect your palate, so there is a need to test which foods will taste good on a plane, and which ones won’t.

That being said, airlines have to run tests on the plane to account for a myriad of factors, like, for example, the fact that the change in pressure as the plane takes off has the power to numb about as much as a third of your taste buds.

If you go to a restaurant, of course, they will offer you food that is made with fresh ingredients and such, but the taste will also be a priority. Well, when it comes to airplane food, the taste stays in the second plan, as the top priority is safety.

Because caterers supply thousands of meals, they need to make sure that everything they send into the plane is cooked just right, as airlines can easily get sued over food that is bad.

Airlines will compromise the texture or the taste of the food to guarantee that it is safe to eat it – so, no, you won’t be seeing any perfectly-cooked steaks around here.

7. Plane food may not taste good

During a flight, the pressure inside the cabin will drop, and this reduced atmospheric pressure will result in a dull appetite, as well as in changes to your sensitivity to some tastes.

The dry air in the cabin will also leave you with a dry mouth, which will result in a change in the composition of your saliva, leaving behind a bitter taste in your mouth. For all of these reasons, enjoying airplane food can be quite challenging.

Flight delays won’t affect just the passengers – the caterers will be affected as well. As you are waiting to board your plane, the food inside it is also waiting to be served.

If the flight is delayed for some reason and the food is already inside it, the airline will throw it away as a safety measure to prevent food poisoning. They prefer to get a full stock replacement than to serve a suspect meal and get sued over it.

If you suffer from flatulence during your flight, plane food might be the thing to blame. Studies have come to show that there is a possibility of increased intestinal gas production at cruising altitude, all due to the limitations in cabin pressure.

If this happens to you, even when you choose to invest in healthy snacks on the plane, maybe the solution is to not eat at all.

10. Avoid seafood at all costs

Members of trusted traveler programs will know that the wisest thing to do is to stay away from seafood – and why? Because they fly so much, they have figured out that this type of food doesn’t work quite well in-flight.

Plus, if you feel sick inside the plane your travel insurance won’t cover it, so the better way to be safe is to not eat it at all.

According to a report by Business Insider, an EPA study discovered that one in every eight planes is failing the agency’s standards when it comes to water safety. That being said, drinking tap water on the plane is a big no-no – and this extends to coffee and tea.

Tap water on planes is stored inside tanks, which means that it has been stagnated for God knows how long, giving it time to develop all kinds of bacteria, which can be harmful to your health. We know that bottled water is super pricey on planes, but your health and safety deserve more.

13 Most Gorgeous Forests in The World!

8 Secrets To Travel Like A Local And Live Your Best...

7 Reasons You Smell Horrible When Traveling!